It’s time for a new chapter in the American history of death.

For much of our American history, it was not uncommon for a family to lose a child. Disease, childbirth, war, and lack of hospitals made it unusual for a household *not* to have been touched by death in some way.

Then, there were two important changes in our country’s history. First, the medical world made significant advances: hospitals became more accessible and more sanitary, vaccines were discovered and distributed, and diseases became more curable — resulting in fewer deaths. Second, death became a topic of interest among philosophers and psychologists, who suggested that death had become an “unnatural taboo” which caused repression of emotion that would surely cause damage to one’s mental health.

On one end of the pendulum swing, in 1911, an article called “Facing Death” in Harpers Bazaar said, “Grief is self-pity. Perhaps if we were less centered upon our own happiness, grief over the loss of our beloved ones would not be the terrible thing that it is.” On the other end of the pendulum swing, the 1960s and 1970s brought about an emphasis on self-expression, talk therapy, and the overwhelming influence of Elisabeth Kübler-Ross‘s book On Death and Dying* published in 1969. By the late 1990s, it had become a widespread belief that people must “give voice” to their grief, or else it would fester. And now we do get urged to go to group therapy to revisit our loss… over, and over, and over.

It’s time for a new chapter in our American history of death. In this chapter, we don’t expect people to die, and we don’t expect people not to die. We don’t judge people for expressing themselves, and we don’t judge people for not expressing themselves. We mourn the ones we have lost, and we celebrate that we had them in the first place. We remember the loved ones who have died, but we never forget that we are still alive… and we have a lot of living left to do.

The circle of life in our back yard.

Spring has finally arrived in Minnesota. All around us we see signs of rebirth. But this year, I’m also painfully aware of the flip side… we can’t appreciate new life without acknowledging the inevitability and significance of death.

This circle of life is literally on display in my back yard. About four years ago, we noticed that a pair of foxes would appear in our yard from time to time. When the snow started to melt, we realized they had created a den under the trees and brush. 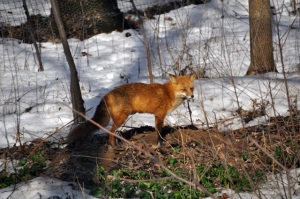 Daddy Fox near the entrance of the den.

A couple of months after the foxes moved in, they had babies! We had seen a lot of wildlife in our wooded neighborhood, but never anything as cute as this. Our whole family was excited to see the little “kits” grow from little balls of fluff to the size of a small dog. As the weather got warmer and the grass and brush started to grow in, the babies would come out to play.

We were delighted when the foxes returned the next year, and the next. The boys loved to watch them from the kitchen windows:

But this winter, I didn’t see the foxes like I had in the past. I worried that they had decided not to come back to us this year.

But then I finally saw the daddy fox. He appeared the morning after Julian died. Somehow, he looked both confident and carefree as he trotted through the yard. He reminded me of my strong, sweet little Julian.

During those first days of the “after,” I’d often look out the kitchen window toward the fox den. Through my fog of shock and grief, I admired this pair of faithful, committed fox parents. I felt honored that they had picked our yard as the safe place to give birth and raise their little ones, especially this year.

As the snow melted, I’d search for signs of babies. I was surprised I hadn’t seen them yet. Did they pick a different den this year? Did they not have babies this year? Something seemed off. And then on Easter morning, I saw a little mound of brown fluff moving around. A fox baby! I felt relieved. Nature had once again come full circle. And how fitting to have the first sighting on Easter.

I only saw one baby on Easter, but I assumed there must be more. In past years, we had always seen at least 3 or 4 kits. But I kept seeing only one at a time, never a group playing games and tackling each other like in the video from last year. And then just this week, it hit me: there is only one baby this year.

The fox mama that had raised her family in my yard year after year, the creature that I somehow felt kinship with, had ONE BABY. One. She most likely gave birth to at least one more, but only one made it. One. Just like me. There used to be more, but now there is one.

I wondered if this “only child” fox baby would be different, growing up without brothers and sisters to play with. But this week I saw something amazing. I was standing in my kitchen, and something caught my eye outside. A small pack of deer were eating their way through our yard (this is not an uncommon occurrence). But then I noticed something else: the fox baby was “hunting” one of the fawns. It was a showdown between baby fox and baby deer. The kit clearly had developed his instinct to hunt, but hadn’t yet quite learned how to identify appropriate prey. I took a (blurry) picture of this unbelievable and hilarious scene:

Battle of the babies: Fox vs. Deer

This little fox was focused and determined. He was brave. He was like Oscar — exploring life on his own, finding his own interests, discovering his natural instincts.

The fox family reminds us that the circle of life will always continue, even if it doesn’t quite fit our picture. The average litter is 4-6 kits, but sometimes there is only one. Sometimes, the promise of new life gets taken away too soon. We may not have the future we planned, but that doesn’t mean we are defeated. It reminds us to be stronger, braver, and more motivated to make the most of life.

The foxes returned the morning after Julian died. For the first time, there was only one baby. These were not coincidences. Instead, these were just the first of several signs that there is something bigger at work here. Call it God, the Universe, Mother Nature. No matter what you call it, it is significant. It is meaningful. It is the circle of life.