The last of the firsts. 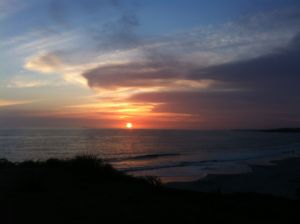 Today is March 3rd. That means it’s Julian’s first Angelversary. One year since the worst day of my life. The last milestone in a year of unimaginable “firsts.”

There’s a surprising amount of relief in reaching the last of these firsts, the first anniversary of his death. Perhaps the only thing I’ve heard about grieving that might be universally true is, “the first year is the hardest.” And as of today, my family and I have survived that year. It’s behind us now. Another bereaved parent recently told me, “it never gets better, but it does get easier.” I believe that will be true for us, too.

Today, I’m thankful for many things. In this particular moment, I’m thankful that my parents encouraged John and I to take a week off of work and take Oscar out of school to join them in Mexico, at the resort that we spent many family spring breaks growing up. I’m thankful that we agreed to it, despite the fact that we had already planned a vacation for the end of March. It’s peaceful and relaxing here, and I’m grateful to be able to spend this day with my husband, oldest son, and parents.

Today I’ve been reflecting on how I have changed in the past year, as I listen to the waves crashing nearby. As irrational as it seems now, I remember that in the first days after Julian’s death, I felt a very real fear that I would somehow forget him. I also started feeling internal and external judgement about my grieving process — as if intense grief indicated intense love, and healing from grief indicated a lack of love. And if I stopped grieving, I would forget him.

But with time, I gained confidence in my own approach to grieving and healing. Thankfully, I eventually came to the conclusion that Martha Whitmore Hickman described so eloquently in Healing After Loss:

“Of course time eases our grief, provided we let it follow its course and give it its due. Few of us would want the intensity and desolation of early grief to stay with us forever. That’s not what we’re afraid of.

But we may be afraid that we’ll lose the intensity of love we felt for the one we have lost.

At first these two–the grief and the love–are so wedded to each other that we cannot separate them. We may cling to the grief in desperation so we will be sure not to lose the love.

Perhaps the grief and the love will always be wedded to each other to some degree, like two sides of a coin. But maybe after a while, when we flip the coin, it will almost always be the love that turns up on top.”

Today, I’m thankful that in fact love almost always does turn up on top. I’m also thankful that a year has passed and I can say with all certainty that he isn’t alive, but he isn’t gone. I still have a relationship with him. I see him everywhere. I see him in my dreams. I saw him in the whales that appeared a short distance off the beach this morning, despite the fact that they weren’t expected for a couple more weeks. I see him in every sunset.

Sometimes, even in Mexico, the sunset is obstructed by clouds. But that doesn’t make me question whether or not the sun exists. Similarly, even if I don’t see or feel him, I know he’s there. A year ago I was afraid he was gone forever. Today I know he’s with me always.

Today is the first anniversary, the last of the firsts. And as my mom said to me just a few minutes ago, “It’s a good day.”

Posted by Emily Eaton on March 3, 2012 in Angelversaries, year 2

18 responses to “The last of the firsts.”