The myth of the “five stages of grief”

We’ve all heard about the five stages of grief, right? Many of us have them memorized, or could name at least two or three of the stages. But, do we know where they came from? Do we know what they are based on? Does it occur to us to question whether or not they are based on actual research? Nine months ago, my answers would have been no, no, and no.

But here I am today, almost nine months after Julian‘s death, with a whole new perspective. As I mentioned in one of my early blog posts, one of the first things I did after I came out of my initial shock was ask a friend, “What are the 5 stages of grief, again?” I wanted a roadmap for my future. I wanted a to-do list. Then, I learned that the theory of “The Five Stages of Grief” — also known as the “Kübler-Ross Model” — is neither based on bereavement nor scientific research. Surprised? I was. So I decided it deserved another blog post.

I wasn’t just surprised, I was disappointed when I learned the facts about Kübler-Ross’s five stages. I was mostly disappointed because I liked the idea of having a map or path through this process, which I could follow and track my progress through a journey that by definition (I assumed) had a beginning, middle, and end. But I was also disappointed to learn that these five stages had become conventional wisdom in the field of psychology and mental health without any scientific research to back it up.

So who was Elisabeth Kübler-Ross, and where did these five stages come from? In the ’60s, she was one of the first psychologists to dedicate her career to working with terminally ill patients. She became a respected lecturer on the topic of how nurses and doctors could/should interact with their terminal patients. Because of the uniqueness of her work and her lectures, she was offered a book deal. It was then — after signing her book deal, and with a deadline looming — that she came up with the stage theory.

She wrote her book based on her work (not “research”) with terminally ill patients (not “bereaved people”). That first book, On Death and Dying, was published in 1969 and was interpreted as fact, and also turned her into a bit of a celebrity. Perhaps it was because of her sudden fame that she didn’t go out of her way to point out that the five stages were simply her “theory,” not proven through research. But in reality, as the introduction to the 40th anniversary edition says, “It is essential to note that … On Death & Dying is not a work of research. It is a popular book of description, observation and reflection based on a series of dialogs with dying people.” 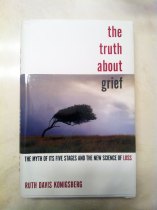 The unfortunate thing for people like me is that the “conventional wisdom” of the five stages has made a negative impact on our experience of grief (as if it weren’t bad enough to be grieving in the first place). One of the most helpful and interesting books I’ve read in this past 6 months, The Truth About Grief by Ruth Davis Konigsberg, confirms what I have experienced: the embrace of the “Kübler-Ross model”…

“…has actually lengthened the expected duration of grief and made us more judgmental of those who stray from the designated path. We have been misled by the concept that grief is a series of steps that ultimately deposit us at a psychological finish line, even while social science increasingly indicates that it’s more of a grab bag of symptoms that come and go and, eventually, simply lift.”

Kübler-Ross, standing on the shoulders of Freud before her, set the foundation for today’s understanding of grief. Unfortunately for all of us, this foundation is fundamentally flawed. To quote The Truth about Grief again:

“a subject that is not supposed to be discussed… is the possibility that grief may be finite. ‘There is no timeline for grief,’ is how the advice books and web sites put it. Even the concept of recovery itself is seen as a misleading elusive goal. Though Kübler-Ross identified acceptance as her final stage, implying some kind of end point, she also said that you could never fully close the chapter on grief. “The reality is that you will grieve forever,” she concluded in On Grief and Grieving. “You will not ‘get over’ the loss of a loved one; you will learn to live with it.” This undoubtedly may be true for many, but the grief movement has taken that statement to mean that no one should ever get over such a loss, although that rule seems to get more strictly applied to women than men.”

Did you catch that last part? That rule seems to get more strictly applied to women than men. For me personally, it’s the judgement of myself and others (real or imagined) that has been hardest part of my grieving process. After those first couple weeks of shock, my instincts told me to focus on moving forward — but I couldn’t stop the voice that would pop up in my head that questioned, “Wouldn’t a ‘good mother’ actually never move forward from losing her child? What does that say about me that I want to survive this? What will this say about me if I’m actually successful?”

Now, almost nine months later, I don’t ask myself those questions anymore. I know there are people who read this blog, or see me going about my day, and ask those questions in their head. (“How can she work? How can she be functional? How can she be smiling and laughing? If my child died, I wouldn’t be able to do any of those things. She must be in denial.”) These people worry that I’m not grieving correctly, and someday it’s going to finally “hit me.” The reality is, the only “denial” I experienced was Julian’s last day in the hospital. I was in absolute denial that he could die. Until he did. (You can read about that day on his CaringBridge site.)

I believe that the concern about denial and other judgement is primarily based assumptions about the stages of grief, and society’s expectation that no one should get over the loss of a child (especially a mother). But the truth is, both science and my natural instincts tell me that those people (including Kübler-Ross) are wrong.

We all need to re-think and re-discover what grieving really looks like.

Posted by Emily Eaton on December 1, 2011 in the second six months

13 responses to “The myth of the “five stages of grief””